You are here: Home / Archives for The Avengers

Okay, one more post before I go to bed.
My Top Ten Favorite Avengers of All-Time (in order).
Mind you, this list really only goes through issue 300 of the original series and West Coast Avengers number 50 or so. There may have been some great Avengers after that, but they don’t count.

What can you say, he’s Thor! He’s tough as hell, had a great weapon, several cool costumes and used words like penultimate and indefatigable in normal conversation. He had several admirabely lllooonnnggg runs with the team, most notably 1986 to about 1997. Wow.

Ahhh, The Vision. The Avengers needed their Spock. Someone devoid of histrionics. No drama, right? Wrong. The Vision was the center of more Avengers dramas than anyone short of Hank Pym. And he was even involved in those dramas, too. And this was even before John Byrne gutted him of what feelings he had. But, he was a great character, and he looked cool, and his marriage to the foxiest Avenger (The Scralet Witch) made you believe the nerd could get the girl. Go him.

Now, I did say that Wanda was the foxiest Avenger, but Janet Van Dyne runs a close second, and she definitely wins Best Dressed. Nobody, absolutely NOBODY had more costumes than The Wasp. No one. And she was also one hell of a leader. She was in charge in the mid-80s and they were some great years. Captain America was a difficult act to follow, but she did it admirably well. I especially enjoyed watching her keep Hercules in line.

Speaking of Hercules … Herc was a God for the 70s. Thor was the 60s version, pure and noble, and perfect. I can imagine Herc doing a lot of blow in the 70s. Zeus knows he got more pussy than any other Avenger. He just couldn’t help himself. But he was kind at heart, and unafraid of being the fool on occassion.

D-Rama, thy name is Pym. He had 5 or 6 identities in the Avengers. He beat his wife (just a little), he tried to kill the Avengers, he created their greatest nemesis (Ultron), he even got kicked off the team. Hank Pym was real. He was serious, he was dark. He felt a lot of pain. I was young, but I got Pym, I felt his pain, I understood his anger. He was a warning to a lot of young men. Don’t act like this, or you’ll get kicked off the team.

Okay, look. Wonder Man is strong, and that’s about it. He was also handsome and pompous, and occasisonally a movie star, and he fucked Tigra. What can I say, I guess I wanted to be him. In the early 80s he had a cool red coat and sun-glasses. Later, he got more bold and got a more modern costume. He had a lot of drama too, and was pretty angry a lot of the time. The first 40 issues of West Coast Avengers were pretty much one long therapy session for him. God, he sounds unbearble. Then again, so was I.

Pictured here is Jim Rhodes, but it’s the face of the Iron Man most people know, certainly the most long-lasting helmet. Tony Stark is a bad-ass inventor. He’s Steves Job and Wozniak put together. He’s also a playboy. He’s also an alcoholic. He occassionally tried to hide his identity from the Avengers. Whatever. His armor was awesome. He could do his work without anyone seeing his face, and he saved a LOT of assess in his day. It’s hard to think of an Avengers incarnation that didn’t have an Iron Man. Hmmm … I think he missed about 30 issues in the late 60s. That’s true.

Captain America. Captain America is the only human true of heart enough to lift Thor’s hammer. If that doesn’t sum it all up, I don’t know what does. Cap is a continual up-ending. He never stops fighting. He never gives up. He always does what’s right. At the end of the day, looking in the mirror or whatnot, he’s whom we all want to be.

There’s an issue somewhere (I’ll find it.) that features Hawkeye pilotting an Avengers Quinjet as it crashes, and it has a caption something like this: “Hawkeye isn’t the most popular Avenger, he’s well-liked but nobody’s favorite. Most Avengers are loved for the one thing they do well. Not Hawkeye, because Hawkeye does so many things well.” Okay, psychoanalyze me for that all you want, but that cemented it. I’ve loved everything about Hawkeye ever since. He’s lucky enough to e very cool, to usually have been well-written, and to be one of the few Avengers who’s been in charge a one time or another. He’s young and spirited, but he’s been around longer than most people realize. He’ll never be a superstar, and he’s not exaclt happy about it, but he’s a guy you always want around in a pinch.

Maybe my favorite issue of any comic ever. Mainly for nostalgic reasons right now, but I bet it holds up. It was a brilliant premise. The Avengers were sent back in time, where they took on roles throughout history. Hawkeye became Robin Hood and fought the Black Knight (Iron Man). Captain America was esnt back to World War II. Thor was battling with the Norsemen who imagined him, etc., etc. Great story. Great fun.

More favorite issues to come, as I find them on the web. (Or on my Avengers DVD-Rom.)

That’s one of my favorite panels from Avengers Annual #10, which is on my new Avengers DVD-Rom, one of the sweet-ass birthday presents I got last week. It actually arrived in the mail today, and I’m too excited for words. 19,000 pages of Avengers goodness, all on my Mac. (Yes, I copied the entire thing to my hard-drive.) Here it is. So, I’ve decided to quit art and devote myself full-time to The Mighty Avengers. 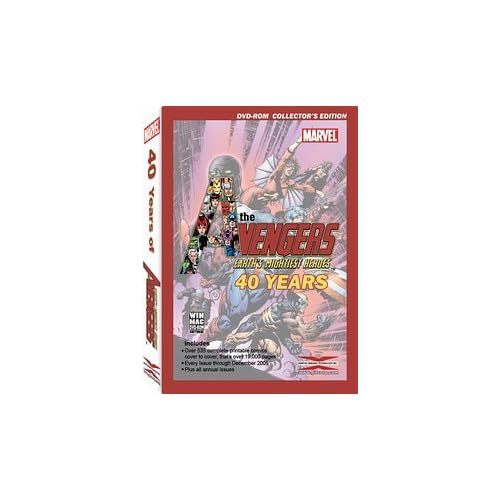